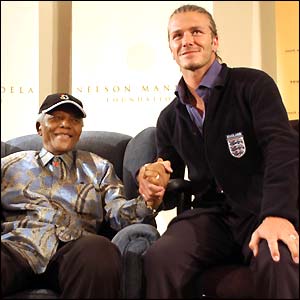 A man given 'hero' status for kicking a piece of leather around a football pitch sitting arm in arm with a true hero of our generation.

The fact that David Beckham is there, technically should not be an 'insult' as such, but it shows what our society has become, when we have to put a 'celebrity' next to what can only be described as a hero, for the general public to display an interest.

It seems that some culture have shut their eyes to other issues or achievements throughout the world and now to have Beckham and Mandela together only some will then take the interest.

If this is what it takes to create awareness, then maybe David Beckham would be the most appropriate person for this as it could then trigger more of the younger audience, where commonly more of an older audience are more likely to be aware of the great life and influences of Mandela.

We don't know the backgrounds of this photo and for what reasons it was taken. Does this represent a famous man giving something back and trying to create awareness, or is it a famous man who saw an opportunity to gain more recognition for himself?

Mandela is an absolutely iconic image by himself and probably one of the most recognised and respected people in the world. After 30 years in prison he still became the president of South Africa and a world leader. In my eyes I think he is far bigger than David Beckham ever was or ever will be! What Mandela stood for, believed in and fought for will have a lasting effect of future generations!