I think this has got to be one of the most iconic images ever produced by the media. Superman was created way back in the 1930s, and although the symbol looked a little different back then, it has stood the tests of time and is still recognised by nearly everybody today. Whilst provoking fond reactions from fans, even non-fans recognise the icon for what it is - Superman's logo.

Superman is regarded as one of the greatest superhero characters ever created, having had comic books, TV series, feature films and no end of merchandise made in 'his' name. Only a couple of hours ago I saw a guy walk past sporting the 'S' on his t-shirt (which gave me the idea for this post)!

There is also the idea of the 'Superman' curse floating around, which claims that every actor/film-maker attributed with the role will suffer because of it, based on the misfortunes of some such as Christopher Reeve and Marlon Brando. Although this is all probably just coincidence, the symbol could have negative connotations for those who believe in the curse. Still, the icon itself is mainly a positive one, and reminds me of how much we need a superhero of our own right now.

Re: The Superman 'S'

i am in love with superman but his s isnt originally his. it was taken from the comic book Steel. 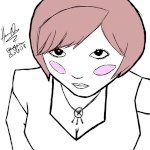