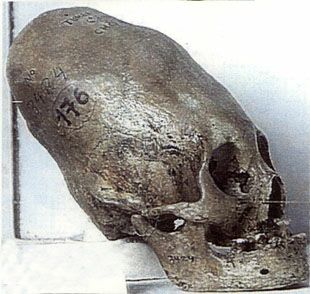 To start, I find a photo of my dad more important. Yet it would lead to me typing about memories and gradually reaching epiphanies about myself as you read this. So to save me writing into my enlightenment, I decided to share another image, which I think shines a light on our growth as a race.

This is a vague summary of the context I found this image so apologies.

A group of human beings evolved rapidly in Egypt, surpassing the race around them in height, intellect and consciousness. The memory area of their brains grew creating the cone like shape... This skull was found in Egypt.The rest of the history/story can be found through a few minutes of research using a term like "nephilim". Again, apologies it was so vague.

As an image is open to mass interpretation, most would see this as a freak skull, a conspiracy theory. However the image within the context I found it, lingers in my mind as an interesting glimpse to what our race is growing towards, a hindsight to the future of our evolution.