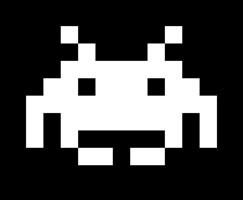 Was thinking maybe Sonic or Mario, perhaps Pac-Man or the Pac-Man ghosts would have been more recognisable icons.
This though is good.
I expect it makes you think of games. Maybe more specifically retro games or more broadly digital arts. Whichever, it does it quickly and simply.

I can't look at this without thinking of 'Invader'.. it actually makes me think of street art more than games now and it's always nice to see one in unexpected places around the world

The image is built only of blank squares which create the myth of those who will attack and invade the black space, to which the player responds by thinking no further than destroying them. In a political sense it relates to many other similar ideas based on the views of a widely feared enemy, the unknown.
Although technology has changed the theme persists. The image has survived because of what it represents to people, relating to the aim of the game - survival. Through this game people could find a way into the game world as easily as though it were one of our more modern games, despite its simplicity.